The mentally disturbed man was shot to death by St. Louis law-enforcement officers after walking toward them with a knife. Video of the incident has sparked debate about the police’s reaction.

The police officers who shot and killed Kajieme Powell, 25, in St. Louis, Missouri, on Tuesday did so while being recorded by a man with a cell phone camera. St. Louis Police Chief Sam Dotson and police union officials say the video is exculpatory and that the two officers on the scene followed proper protocol. Many who’ve watched the shooting grant that the police were put in a difficult, volatile, potentially deadly situation, but still feel that their actions were wrongheaded. The footage certain to be debated in coming days begins at the 1:20 mark. Be forewarned that the video shows a man being shot repeatedly and killed. Due to its disturbing nature some readers may prefer to skip watching it entirely. 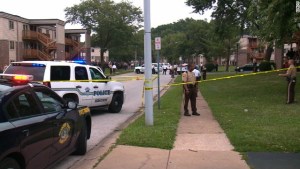 What I see in this video (as well as in an even clearer version that CNN somehow obtained) is a man almost certainly suffering from mental illness who deliberately provokes these police officers, putting them in a terrible, unfair position that will probably haunt them forever—and police officers who immediately played into the orchestrated confrontation that the seemingly unstable man created. I also see an incident that contradicts what Police Chief Sam Dotson described to onlookers at the scene, as reported by the St. Louis Dispatch. The discrepancy comes after police arrive and start giving Powell orders…

…but he became more agitated and walked toward them, reaching for his waistband. Witnesses told police the man was yelling, “Shoot me, kill me now,” during the encounter, Dotson said. The officers drew their weapons and ordered Powell to stop. He did stop, but then pulled out a knife and came at the officers, gripping and holding it high, Dotson said. They ordered him to stop and drop the knife. When he got within 2 or 3 feet of the officers, they fired, killing Powell.

Was Powell holding a knife high as he approached the police officers? I don’t see that. It looks to me as though his arms remain low at his sides, and that detail doesn’t appear in the police report. The cause of this disparity isn’t clear, but the position of the knife doesn’t significantly change how much of a threat it posed, anyways.

When I first watched the video, I wanted the officers to back up to buy time as the man slowly approached. A police training video helped me to better understand the mindset of the officers, given the information that they’ve likely been given about research into the distance at which a man with a knife is dangerous:

With that in mind, it seems to me that the initial set-up chosen by the police officers was the bigger problem. The man with the knife wasn’t anywhere near other onlookers and perhaps could’ve been calmed or incapacitated with less than lethal force had the officers given themselves more space and time. If they had it do to over, would they have parked farther away, or stood on the other side of their vehicle while engaging the man? Would they assert themselves less confrontationally? (On the other hand, would you or I do any better in their place?)

The police arrive and instantly escalate the situation… Powell looks sick more than he looks dangerous. But the police draw their weapons as soon as they exit their car… They don’t seem to know how to stop Powell, save for using deadly force. But all Powell had was a steak knife. If the police had been in their car, with the windows rolled up, he could have done little to hurt them…

…Even when he advances on police, he walks, rather than runs… He swings his arms normally, rather than entering into a fighting stance. They begin yelling at him to stop. And when they begin shooting, they shoot to kill—even continuing to shoot when Powell is motionless on the ground. There is no warning shot, even. It does not seem like it should be so easy to take a life.

A police officer might retort that law enforcement shouldn’t be obligated to take on any extra risk to their own lives in a dangerous situation wholly and needlessly created by a person menacing them. A citizen deliberately baiting police with a deadly weapon cannot expect restraint. Even a small knife can be deadly.

In the abstract, I can’t disagree with those principles—and if questionable police killings were confined to such circumstances, there’d be less cause than now to complain about overzealous law enforcement. Yet watching this video, it seems certain in hindsight that the threat could’ve been stopped with force short of at least nine and as many as 12 gunshots; and again, if they’d kept more initial distance between themselves and a man they knew to have a knife before they even arrived, perhaps no deadly threat would’ve materialized. If they’d stood well back and engaged, perhaps Powell would’ve kept coming with a knife until stopped.

But they didn’t even attempt that strategy. (As Elizabeth Brown notes, deadly interactions with the mentally ill happen a lot, and failure to even try deescalating is often a factor.) I suspect that Klein is right when he says that in this case, despite clear video evidence of what happened, “what the police believe to be the right thing and what the people they serve believe to be the right thing may be very different.”

Perhaps highlighting different reactions will at least clarify how different Americans feel about the same incident. If nothing else, a gulf in public opinion almost certainly undermines the effectiveness of police departments that depend on community support. With that in mind, here are some illuminating reactions to the killing.